The Twins Research Centre strives to empower and educate families about their twin pregnancy, labour and delivery. In this area, we’ll provide an overview of common terms you will hear, as well as some common questions and address concerns you may have with your twin pregnancy. 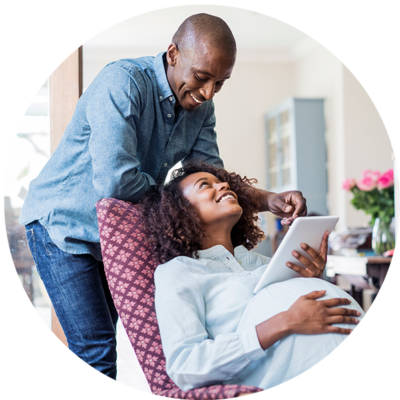 This refers to the genetic relationship between your twins. It stems from “zygote” which refers to the single fertilized egg. There are two options:

Opposite-sex twins (male and female) are always dizygotic. However, in the case of same-sex twins, determining whether they are identical (monozygotic) or non-identical (dizygotic) may require additional information including ultrasounds findings regarding chorionicity (as described below), blood type or DNA analysis.

Relationship between zygosity and chorionicity

Dizygotic (fraternal) twins would always be dichorionic, since each twin originates from a separate fertilized egg, each developing into a fetus with its own membranes and placenta. In contrast, monozygotic (identical) twins may be either dichorionic (2 placentas) or monochorionic (single placenta), depending on when the egg splits.

When the egg splits at a very early stage (usually within first three days following fertilization, and before the placenta begins to form), there is the possibility of each baby having its own membranes and placenta, which results in dichorionic twins. However, when the egg splits at a later stage (after day three, when the placenta has already began to from), the resulting twin will ‘need’ to share the placenta and membranes that were already formed prior to the switch, resulting in monochorionic twins.

Rarely, the egg splits at an even later stage, after the fetal body started to develop, in which case the two twins will be sharing the body parts that were already formed at the time of split, resulting in conjoined twins. This is illustrated in the figure below.

A common mistake is that dichorionic twins, where there are two placentas, are necessarily non-identical twins. This is not always the case, as about a third of the identical (monozygotic) twins will be dichorionic, as illustrated in the figure below. 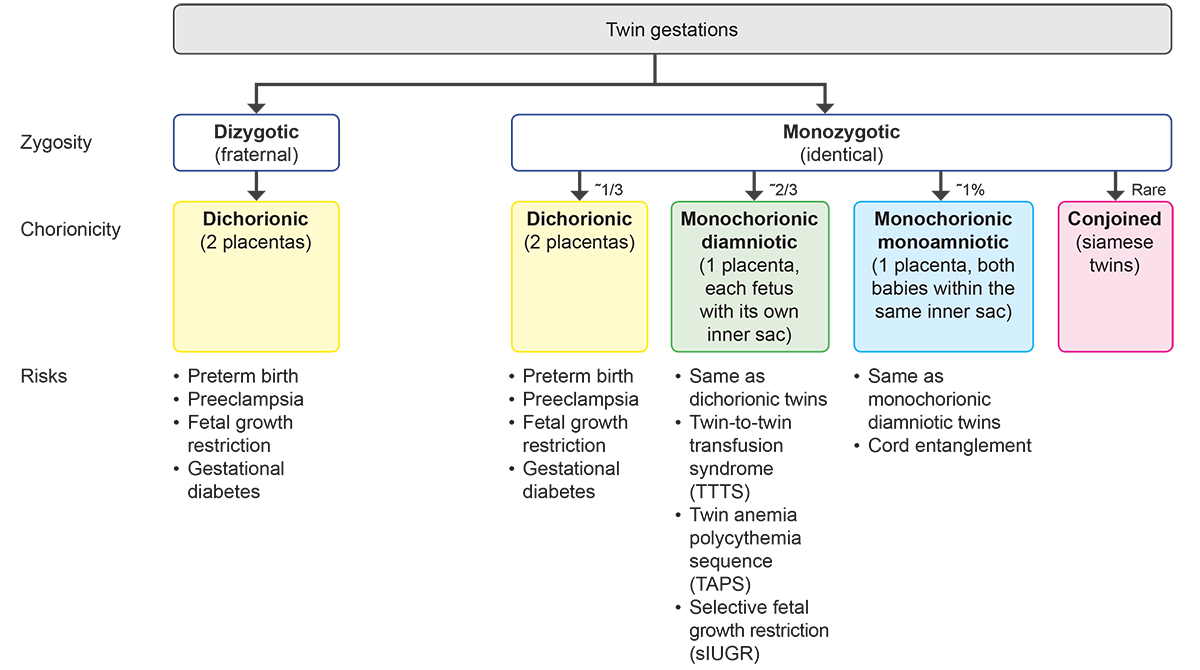 Why am I considered as having a “high risk” pregnancy?

When you’re carrying twins, you’re at greater risk for a number of complications. Because of this, you will be followed by an obstetrician or a special ‘high risk’ obstetrician called a “maternal fetal medicine specialist” or MFM. You are at a higher risk for:

This all may sound pretty scary, but the good news is you and your health care team can lower your risk and identify any problems earlier, rather than later. You can then work with your health care providers to manage and minimize the impact of any complications.

This is a common question from parents expecting twins. Twins’ growth rate is usually the same as a single pregnancy until around weeks 30 to 32, when they do slow down a little as the babies are competing more for nutrients. Your health care team will keep a close eye on your babies’ growth throughout the pregnancy. Keep in mind, your babies may weigh less as it’s more likely they will be born earlier.

Is it okay to exercise when I’m pregnant with twins?

We routinely monitor the length of your cervix during pregnancy. Having a cervical shortening increases the risk of preterm birth. In cases in which the cervix is found to be short or in the case of preterm contractions we will advise that you restrict physical activity.

How should I give birth – vaginal delivery vs. Caesarian-section?

The answer about how you will deliver your twins depends on several factors. The primary factor is the way the first twin to come out is positioned within your uterus. When the first twin is in a breech presentation, delivery should be via C-section.

A large randomized controlled trial, led by Dr. Barrett (the Twin Birth Study) was conducted specifically to address this point. The trial provided evidence that as long as the first twin is with the head down, vaginal delivery is as safe as a C-section, and this is the approach that is taken at Sunnybrook.

A vaginal twin birth is somewhat different that the delivery of a single baby. The delivery of the first twin is essentially similar to that of a normal delivery in a singleton pregnancy. The main difference is that once the first twin is out, there is a small risk of complications for the second twin, including cord prolapsed, detachment of the placenta (placental abruption) due to the sudden decompression of the uterus after the delivery of the first twin, or change in the position of the second twin. Because of that, there is a risk of approximately five per cent that an urgent C-section will be needed for the second twin. For that reason, vaginal twin birth always takes place in the operating room, with the team being set up for urgent C-section if needed.

Are there good online calculators I can use for my pregnancy and determining potential due dates?

Check out this calculator from perinatology.com

Preterm birth in a twin pregnancy

Patients with twin pregnancies are at an increased risk of giving birth early (called preterm birth or PTB). There has been much effort put into identifying effective strategies to prevent PTB in twin pregnancies. Research has shown that following patients with twins in a specialized Twins Clinic can result in improved pregnancy outcomes.1

Signs and Symptoms of PTB

Some of the symptoms of preterm birth include preterm contractions (which may be felt as abdominal cramping, tightening, or period-like lower back pain), pelvic pressure, leakage of fluid, vaginal bleeding or increased vaginal discharge. Although some of these symptoms may be non-specific, you should speak with your doctor or come to the hospital if you experience any of these symptoms.

There are currently no effective interventions for the prevention of preterm birth in all twin pregnancies.2,3 However, there is evidence that in a subset of patients with twin pregnancies who are found to have a short or dilated cervix, certain intervention such as vaginal progesterone4 and cervical cerclage may be effective in decreasing the risk of preterm birth.5,6

Research from our group provided evidence that taking multiple measurements of cervical length over time (compared to a single measurement of cervical length at approximately 20 weeks) can improve the detection of patients at risk of PTB.7,8 Therefore, at the Twins Clinic we will measure your cervix via vaginal ultrasound every 2 weeks between 16 and 28 weeks to allow for early preventative interventions in the case of cervical shortening.

Fetal growth in a twin pregnancy

This is a common question from parents expecting twins.

Twins grow like other babies until around weeks 26-28 of your pregnancy, when their growth does slow down a little.

The reason for the slower growth of twin fetuses is not entirely clear. In the past, researchers have understood this issue to be partly because of limited maternal resources available to support two fetuses.

However, recently, research has shown that the slower growth of twins may be the result of ‘fetal programming’ early in pregnancy. Slower growth may allow twins to gain maturity by decreasing the stretching of the uterus, and potentially decreasing the risk of preterm birth. In this situation, twin fetuses may ‘compromise’ their growth to increase survival.

This directly related to what growth charts providers should use. For example:

Our research team has found that the use of twin-based charts can result in a considerable reduction in the amount of twins identified as growth restricted, without compromising the detection of twins that are at risk of complications.

Therefore, Sunnybrook’s Twins Clinic uses both singleton- and twin-based growth charts to monitor your babies, along with other steps like keeping a close eye on your placenta. Please speak to your health care team if you have any questions or concerns about your babies’ growth while pregnant.

Fetal growth is a major focus of our research team. To read some of our published research on this topic, please visit https://pubmed.ncbi.nlm.nih.gov/30501543/1–3

Sexual activity during a twin pregnancy

Can I have sex while pregnant with twins?

Intimacy is an important part of your relationship with your partner. Sexual activity is not discouraged in twin pregnancies, unless there are complications that your healthcare provider has discussed with you.

Sunnybrook’s Twins Clinic recommends against sexual intercourse if you have both a short cervix and are pregnant with twins, especially in cases with severe or early-onset cervical shortening.

To understand a bit more about this issue, we have compiled available evidence on this topic below.

Is there evidence from Twin Pregnancies?

If you experience discomfort related to sex during your twin pregnancy, avoid lying on your back during intercourse after the fourth month of pregnancy. Try different positions to reduce pressure and use a personal lubricant to help with dryness.

If you notice pain, bleeding, abnormal discharge, or contractions after sex, we recommend you call your healthcare provider.

And remember, intimacy goes beyond sexual intercourse—it is not just sex. Intimacy is about closeness, about being together, and about creating and maintaining a relationship.

If you have any questions about sexual activity during your twin pregnancy, do not hesitate to ask your healthcare provider at your next prenatal visit.